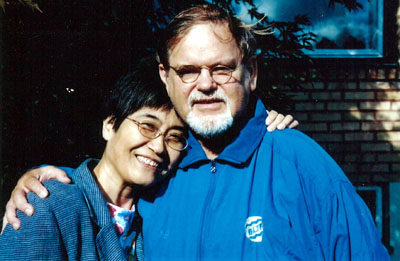 S atoko and Sven met in 1975. They found that music was their greatest common interest and with modest means they soon began to strive in various ways to spread awareness of Swedish musical culture around the world. The first clear manifestation of this was the two-week international course in early music and dance, Pijpa, Qwädha, Dansa (PQD), which they first held in the summer of 1978 and repeated the following ten summers.

Satoko Berger founded her company Musica Rediviva in 1978, initially to provide performers of early music with historical musical instruments and sheet music. For Satoko, herself studying and performing early dance, the experience of interaction between musicians and dancers was an eye-opener. She realized that the dancers might have a continual need of suitable recorded music to practice to. As a result, Musica Rediviva also became a record label in 1989. Thus, among the first CD productions, we find Monsieur Arbeau’s School of Dancing Vol. I & II.

Her work as a CD producer further expanded her already impressive network of contacts. With the support of musicians, historians and instrument experts, she has been able to initiate cross-fertilizing collaboration between artists, ensembles, orchestras and institutions. Thus, she organizes concerts and visiting tutor programs in Japan for Swedish artists, and helps Japanese musicians to give concerts and students to take lessons in Sweden.

Sven Berger, now retired from the college of music in Gothenburg, was a pioneer within the early music revival in the 1960s. He has established a reputation through concerts and recordings, including performances with his own ensembles Joculatores Upsalienses and Convivium Musicum Gothenburgense. His outstanding knowledge of musical genres, instruments and notation has not only been applied extensively within the music college. He also has a talent for arranging music for various ensembles and plays a wide variety of wind instruments; for early music e.g.: cornett, shawms, dulcians and crumhorns, baroque flute, oboe, bassoon, chalumeaux and recorders; for contemporary music e.g.: flutes, recorders, bassoon and saxophones; and especially for folk music e.g.: lur, birch-bark trumpet, cowhorn and the Swedish types of recorder and bagpipes. He even had a leading role as an author in Sohlmans Music Dictionary and the Swedish National Encyclopedia.